Here is what I am living for today, part three.

You made it this far, you might as well keep reading. 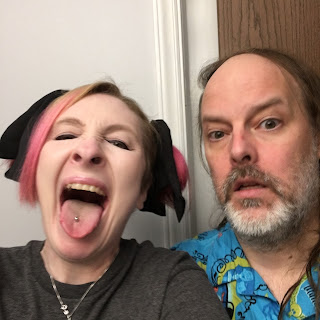 8. Stickers: Stickers stickers stickers stickers sticker stickers stickers!!! Ever more and ever stickier mountains and piles of stickers! Did you know you can subscribe to have loads of stickers sent to your home (or that of someone you love--or hate, I guess. They probably don't care either way.) every single month? I did! Currently I subscribe to the following sticker delivery services: PipSticks, Stickii, Mrs. Grossman's, Violette Sticker Club, and Four Bears, all of which I recommend highly. But wait, there's more! Etsy has a swath of sticker makers who want to help you cover your world in happy, colorful stuff, and Ebay is my go-to for vintage stickers--sheets of Hallmark Snoopys, Dennison foils and patriotic booklets of Presidents' heads, Scratch-n-Sniff candycanes and pizza slices, rolls and rolls of Suzy's Zoo watercolored critters and Boynton characters who reminded me not to let the turkeys get me down long before Offred did. These are the ones that got me hooked as a defenseless child. Do I have an unhealthy obsession based on a trigger installed deep in my spongy elementary-school brain by teachers and parents who rewarded my earliest achievements with sticky bits of paper? Don't be silly. Will I stab you if you rip me off in a sticker swap? No one knows...or at least, no one who lived...

9. Attitudes!: Once known as Throwing Shade, Attitudes! with self-proclaimed "FemiNasty" Erin Gibson and "HomoSensual" Bryan Safi is all kinds of loud, obnoxious fun as they share their opinions on the news and pretty much everything else, too. Warning: This is a left-leaning ball of political goofiness and not for everyone, however, their non-political podcast-in-a-podcast, Groceries!, is good clean (ish) fun for everyone who buys food on a regular basis. They visit different grocery stores and report back with their take on the stores themselves, the food they carry, the people who shop there, and the people who work there. If you are like me and you can easily lose *hours* in the aisles of even the most run-of-the-mill corner Food Lion, give it a listen. This is my favorite thing to listen to in the shower, broken into little bites to entertain me as I clean this mess up into something that won't frighten the villagers each day. Join me, won't you?

10. And finally, there's the underappreciated and at least as maligned by 2020 as the rest of us U.S. Postal Service: Please support the very essential workers who deliver the mail despite rain, sleet, snow, hail, Covid-19, and giant orange tornados spinning a path of postal destruction from Mar-a-Lago to everywhere absentee ballots are mailed. Please, do your part to help and make someone's day at the same time by mailing nice things to someone you care about. There are so many people who are feeling isolated right now, a quick note on the back of a postcard or a ripped-out magazine article you read and really liked stuffed inside an envelope has the potential to make someone feel less alone while supporting the service that can bring a physical something from you to someone a thousand miles away for way less than a dollar. I've been a Mailbox Maven, pen pal to many, avid letter writer, and regular card and thank-you-note sender since my best elementary school pal moved away when I was eight, so I clearly have a vested interest in keeping the U.S. Postal service healthy and functioning, but it's not just mail nerds who benefit. Many people, including many handicapped and/or elderly people, rely on the postal service to bring their prescriptions, to communicate with the outside world, and to pay their bills when getting out of the house is extremely difficult all the time, not just during quarantine. It's also the only delivery option all of us have that safeguards our privacy by law and guarantees delivery under penalty of prosecution. Not to get all serious, but please think hard about what that means when it comes to protecting our most vulnerable citizens as well as ourselves. Then go out and buy a book of stamps. Or better yet, one of the crazy cool totes made from old mail bags or any of the other neat things you can find in the Postal Service Gift Catalog. And tip your mail carrier. It doesn't have to be something big, but if you tuck a gift card to a local grocery store or coffee shop into a nice note, I bet you could make one of the six days a week that they venture out into that big, germy world for you a happier one. :)

So that's my list of ten things I'm living for at the moment. I'm happy to share them if your list is a little light right now. I'd also love to know what made your list that I missed. It's always good to have a few extra on hand.

Posted by Embley Veronica at 11:06 AM No comments:

Here is what I'm living for today, part two.

Okay, there was more of a time lapse between part one of this list and part two than I intended. I know the quarantine was supposed to bring a ton of extra time to explore all sorts of leisurely pursuits, but for me, things somehow got busier and busier as the pandemic marched on, plunking it's germy boots all over our pristine snow-white shag. When the rest of the world became shut-ins like me, suddenly world was delivered direct to Couch Island, where I reside. Just this week I had multiple virtual visitors, a live crafting class, and an entire cat convention sit in my lap via my computer screen, not to mention a kitty-themed bingo tournament (I won blackout, of course. It's the gothiest way to bingo.) Anyway, before I make you wait any longer than you already have, here's part two of what I am living for today and, of course, goofy face pic #2, as promised. 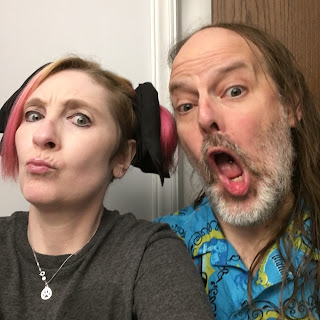 4. Creeptown USA: The sound quality is terrible and occasionally it's impossible to discern what is going on, but I still think all TV should be *exactly* like this YouTube show, 24/7, every single channel. The music is wonderful, the jokes are terrible, the costumes and puppets make The Mighty Boosh (which I adore, no shade intended) look like Jim Henson Studios. There's so much punk rock heart in this show, it's been diagnosed with cardio myopathy and could go into full arrest at any moment so watch it while it lasts.

5. Hercules Candy:  It's not just about the candy, though the candy is good enough to live for on its own. A little shop in Syracuse that's been making handmade candy since the 1910s, this vegan-family owned business makes outstanding vegan and non-vegan treats, though I can only vouch for the vegan stuff. For all I know the non-vegan candy could taste like poison. All the more reason to choose vegan, right? Nearly as addictive as their candy are their live-cast videos that can be found in droves on YouTube. Watching someone pull whole batches of candy on the hook as it turns from shiny topaz to mother-of-pearl is hypnotizing, and I could spend days just watching them stir color into the freshly poured boiling-hot surgary syrup mix, but it's also oddly soothing to hear the cooks chatter away about Rick and Morty or see the store's matriarch shop the aisles of a bulk merchandise store for the perfect bag of potato chips to run through the enrober. I like to turn on the videos while I'm toiling away at the computer and pretend they are my co-workers. They ship all over mainland USA, so don't miss their dark chocolate covered vegan marshmallows. Like their videos, they are so much more than the sum of their parts. Also, order the ribbon candy. I've never had any as good as theirs and I have loved great ribbon candy since forever. They don't guarantee it will arrive unbroken, but I've had good luck with it so far (and besides, I'm going to break it up to eat it, so I'm not going to be all that picky even if it does arrive in shards.) Also not-to-be missed are the "accidentally vegan" nut brittles (I'm partial to the pecan, but you can't go wrong with peanut, cashew, or mixed nut.) with or without chocolate.

6. Tsum Tsums, Molang, and other painfully cute things: When my soul requires cleansing (and in this political climate, it frequently does), I look to these guys to clean it up like those tiny fish who pick carrion from a shark's mouth. Tsum Tsums are a generous gift to all of us from the minds of Tokyo Disney. Tsum tsum (pronounced "zoom zoom") roughly translates to "stack stack" which these characters always seem to need to do to get out of the wacky situations they encounter. Imagine all of your favorite Disney characters in Tic Tac form. Now imagine that they can change their size from regular Tic Tac size to the size of a small hassock. You get the idea. There are a slew of the most "awwwww" inspiring videos starring these creatures on You Tube, and there's a smattering of adorable merchandise available that makes me squeal uncontrollably in its presence. Now, onto Molang who is a similarly shaped character, though a bit more chubby and turned upright. He speaks in garbled nonsense and giggles uncontrollably about 50% of the time he's on the screen. He has a best friend who is a tiny chicken and they do all sorts of adorable things in 15 minute segments on Prime and Hulu and NetFlix and probably YouTube. I cannot emphasize their cuteness and how desperately you need it, enough. What have you got to lose? 15 minutes and the world doesn't look quite so rough around the edges. What else in your life promises something so necessary, achieved so quickly. Give it a try.

7. Hallmark bullshit: It's that time of year when several Hallmark channels (along with a vast array of knock-offs) play nothing but absurd, relentlessly Christmassy rom-coms until January. I can't quite explain why, but I love it. I don't like rom-coms any other time of year, and yet I will consume these like they are oxygen and I'm having a panic attack in a crowded elevator crammed full of diseased Santa Claus impersonators. My favorite kind are the ones where two people have to pretend to be in love until Christmas for some reason. Nothing precludes timeless love like deception.

Stopping here again because my right pinky is sending searing pain up to my elbow and I need to go stuff the whole arm into a brace right now. I will return with a conclusion to this list in a far more timely fashion than its previous components' deliveries. Stay tuned.

Posted by Embley Veronica at 9:13 AM No comments: