Bugs: The Insects and Me

So I’m in the shower when I pick up my scrubby brush revealing a creepy looking black bug. Suddenly exposed to the bright light of bathroom florescents, he loses his little mind and takes a suicide dive into the bathtub, disappearing down the drain while I am frantically searching for a bug cup.  I feel guilty for not moving faster and for maybe secretly not wanting to have to pick up this particularly unpleasant looking bug.

If you don’t know what a bug cup is, you’re probably like most people, who don’t think twice about dispatching an insect with anything that is handy, but being a Buddhist, and a vegan, I have cups for the purpose of escorting insects from my home. The trick is that you turn a cup upside down, capturing the bug in a makeshift bell jar. The next thing you need is a magazine subscription card, always found in great abundance in our home, which you gently slide between the cup and the surface it is resting on. Pick up the whole thing and take it outside at the first opportunity and release said insect with a figurative pat on the back and “good luck to you”.

Things can go wrong though. Occasionally I’ll find a cup I forgot about, something that makes me feel absolutely terrible, having created an inescapable cell and sentenced the poor bug to death by solitary confinement. Oh. Shit. So, my efforts to be kind do sometimes lead to something far worse than death from above by sneaker. Sometimes while I’m running off for a subscription card my cat finds the fascinating new cat toy I have created. By the time I return, there's just an overturned cup, a couple of legs and maybe a wing. Sorry little guy. I didn't mean to set you up as a tiny Roman gladiator doomed to fight a 50 foot tall lion.

It’s hard being a giant in a world of tiny creatures. I would never do something like using pesticides on my yard. Bugs have to live somewhere and I respect that the outdoors belongs to them. I can live with the little cobwebs found in every window of my home. It earns goth points and the tiny spiders are pretty benign. But there are more complicated situations. Ants, for one. When he's been able to find them, Scott’s removed whole nests from the attic by using the shop vac. Sucks them up, dumps them outside, and the ants have a pretty wild alien abduction story for their friends, but what about the scout ants that start a little trail toward the cat food bowl, foretelling an onslaught to come? What about other bugs that can infest and destroy a home directly (like termites) or by laying waste to the pantry, or threaten you bodily by trasmitting disease? Am I creating a genocide when I ask Scott spray the basement for those gigantic scary waterbugs--a.k.a. “massive southern roaches”--to prevent an infestation? Do we proactively kill a few to avoid killing the many?  Do I begin walking with a broom before me, sweeping away any tiny creatures I may accidentally step on? Am I just making lame excuses to avoid things I find icky? Is there an answer at all? 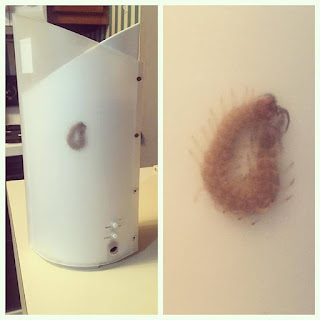 Then there are these. WTF? Despite the cleanliness of her home, my sister-in-law discovered this monster in her essential oil diffuser. Both repelled and fascinated, I looked up centipedes on Goodsearch (It’s not procrastinating, it’s raising money for charity, right?) Hundreds of photos and millions of legs greet me, and I get a feeling like the stomach drop on a roller coaster each time I dare myself to touch one on my screen. Reading further, I find out that their diet consists of various household insects including something known as a carpet beetle. While silently thanking Scott for having replaced all the carpets in our house with wood, I read about these tiny insects and their diet. Their name reflects their delight in nibbling on wool rugs, though they also love other animal parts like fur coats and taxidermy, and I breathe a little vegan sigh of relief. Then I remember that my sister-in-law's household is vegan, too. It hits me. They eat fur. I don’t have dead animals lying about, but there are plenty of live ones. Huh. I think I’ll be vacuuming a lot this week. I also read that they can also be enticed to infest grains when their population gets a little big for its carpet. I look at the photo again and my stomach turns.

One night when I was in high school, I was hit with that still-growing-body kind of hunger that it’s hard to relate to once your bones stop lengthening and your insides stop stretching. In the kitchen I find a box of cereal, pour myself a bowl and eat like I won’t see food again for years. On my way to put my bowl in the sink, I notice tiny dots surfacing in the milk. Looking closer, I see that they are tiny beetles. How many I ate, I can only imagine. And imagine. And imagine.

I’ll be ruminating on that (figuratively, thankfully, for both the insects and me) for a long time to come.

Want to know what kind of bug you've found indoors, outdoors, or that you just accidentally swallowed? You need one of my favorite sites on the whole dang internet: What's that Bug?

Only obliquely related, but so worth sharing, I subscribe to the Parasite of the Day blog (they don't actually post one every day, but who cares?), which I highly recommend. The most recent one is about lice who hitch rides tucked under the wings of flying insects. Enjoy!
Posted by Embley Veronica at 11:39 AM No comments:

The View from Couch Island: A Message from Your Concierge

In an effort to post more often, I've decided to drop the formality of only posting about writing-related things, and write about the things that I trip over every day that grab my attention. So, let's begin right here:

Couch Island is where I live. Since I was diagnosed with Degenerative Disk Disease about seven years ago, my day-to-day world has shrunk down to the couch by the window and the bed. Oh, I get out now and then, depending on how my pain is behaving. Sometimes it's only once in a month that I'll be well enough to leave the house. Thankfully, due to a delicate balance of meds and finicky tricks and tweaks, I can get out of the house once or twice a week for brief and/or well-planned outings like a trip to the grocery store (a place I adore, but only get to see a few times a year) or a visit to a friend's house lugging my pillow and heating pad along if I hope to stay for more than an hour or so. That's called Island Hopping, or getting to know the other couches around town. The pain never stops, but it comes in different volumes. It's pretty loud all the time, but sometimes it's a radio blaring a song you hate right in your ear, and sometimes it's a sound cannon they use to break up riots.

I do still travel as much as I can. I spent my early years travelling the Southeast with my mom and dad whose job as a musical instrument company rep required him to go from music store to music store, doing the job of a website in a pre-internet world. I grew to love the motels--still clad in the leftover palette of the 60's, aquamarine and tangerine--and I still sleep better to the sound of a humming hotel air conditioner than anywhere else. The hotels where I roam are even more important now, since I know I'll be spending a fair amount of time in my room, getting to know Couch (or Bed) Island there. When I am out, a lot of what I do involves remaining in a reclined position. I have lain in pain on the most beautiful beaches of the Caribbean and on verandas overlooking the most vibrant cities. If I have to recline in pain somewhere, it may as well be somewhere amazing.

So, most of my day is spent semi-reclining, the pile of pillows I'm propped on as carefully adjusted as the trigger wires of a bomb on a late-night cop show. This is where I work, play, train my dog, eat most of my meals, and watch the rest of the world do what it does. Welcome to Couch Island. I hope you'll enjoy your time here.
Posted by Embley Veronica at 9:37 PM No comments: