Here's what I'm living for today. Part One.

In a Herculean effort to avoid the looming reality at hand, I present to you a list of ten things I am living for today, just in case you, too, might be needing something to live for in the coming days. So, in no particular order, punctuated by photos of Scott and I making goofy faces at you, here they are. Enjoy!

Ten Things I am Living For Today 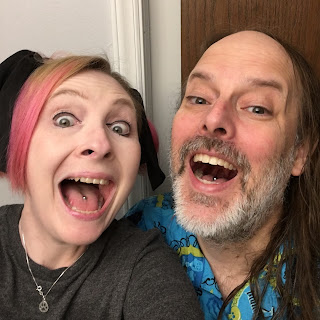 1. VCR Party Live Hello Melindas! Every Tuesday night at 9 p.m. eastern time, Nick and Joe (and Steve and George) light up the screen with a variety of found vhs (and occasionally more modern media) gems and other assorted Nice Things in a show that has more corners than a dodecahedron. To name a few, there's Nick's Excitement Corner, Joe's Tedium Corner, the highly controversial Joe's Filth Corner (personally, I'm a Filthie, but I get it. Some people can't hack it. [Or maybe not everyone likes their entertainment occasionally peppered with surgery footage and student art films from the cat box. I can accept that. That's why they give fair warning for the squeamish and morally opposed. {Check out these crazy parentheticals. I'm letting it all hang out today, grammar and usage fans!}]), George's Creep Corner, and many many more. I am also including, under the VCR Party heading, the rich tapestry of entertainment they provide later in the week as well, with additional programming like Willie's Garage--an ALF fan show that's fun even if you've never seen the show before (just ask George!), and Shaturday Morning Cartoons with lively discussions over Saturday Morning Cartoons from the golden age of predatory child-targeted advertising. Grab your favorite technicolor cereal, (It's an important part of a balanced breakfast!) and be careful not to choke on the prize inside! You're in for some wholesome sugar-fueled fun!

2. Video Fireplaces: Is it okay to shout "fire" in a crowded home theater? You bet it is! One of my favorite soul cleansers no matter the season is spending a long afternoon in the sheltering glow of a video fireplace. Rainy days are my favorite time to turn to the flaming screen for comfort, but because these flames emit no heat (or they *shouldn't* anyway. If they do, please unplug your television now and seek assistance) you can curl up for a cozy nap in front of them in the dead of summer if you like! Even Disney is getting in on the action with their Arendelle Castle Yule Log available year-round if you subscribe to Disney+ (and you know I do.) For those without streaming aps, I recently found (thank you, Ebay) an older Disney Yule Log on DVD from the early 2000's that I haven't even unwrapped yet. (I'll be sure to post a review, but I'm saving it for a holiday treat, so come back December-ish.) You don't even have to have a television anymore. If you're really hardcore you own at least a few analog alternatives like the tiny faux tv on my coffee table that broadcasts nothing but the soft glow of electric flames 24/7, or the wax melt burner Scentsy sold a few years ago that looks like a fire place for rats and guinea pigs with dancing flames and everything. You want flames that smell like gardenias because it's Easter...I can do that! It's incredible. If you think I'm the only person obsessed with year-round Yule logs, just look at the comments on pretty much any of the video fireplaces available via Amazon Prime. There are people who can tell you who directed them just by looking at the flames. We call those people gods. Seriously. That's some badass fandom skillz.

3. Dinosaur Dracula This one's new to me, so I'm not going to say a lot, only that I've lost many hours lately to his website and podcast, The Purple Stuff (look for it wherever you obtain your podcasts.)

Hopefully these will keep you busy today. Come back for part two. My Ehlers-Danlosed-up wrists are, as they say, dah-dah-dah-done, but there's so much more to live for, I promise!

Posted by Embley Veronica at 12:16 PM No comments:

I realize I am rather abruptly posting on my sad, dusty little blog after years of ignoring its existence, however, I do find lately, that at least once daily I have had something of interest I wanted to share with anyone who might be listening. Hence, my renewed hope that this will not a be another one-off post in the echoing emptiness that is this blog. 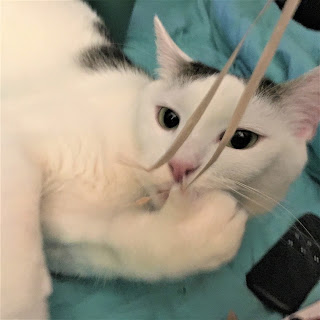 Dangling bits of string in front of my cat's nose:
one of the many things I've been doing instead of posting here.

I have always loved the idea of journaling daily. I so admire those with the discipline to sit down once a day and put down the thoughts and events they've collected over the last twenty-four hours in a book, preferably hard-bound and hand-written. Sadly, every time I have tried to become one of these people, all I end up with is one or two entries, each the size of a novella. The problem is, I don't know how to stop. I sit down at the end of the day, full of enthusiasm and practically glowing self-congratulatory serenity knowing that I am about to become a more self-aware, reflective, purposeful human being the very minute my pen hits the first page of the fancy new Leuchtturm1917 notebook I spent an hour and a half choosing, 15 minutes ordering, and 4 days dreaming about and all the wonderful, introspective sort of things I was going to write inside it once it arrived. The first evening of the day it does, my pen hits the paper and instantly I feel regretful that I've inevitably made some sort of aesthetic error right away (and M with 3 humps or a D that's too portly) but it's too late to stop now. I furiously scribble my every inner thought, and every remotely significant incident of my day. By the time I look up, it is 4 a.m. The next evening, the same thing happens and by evening number three, I've fallen asleep at 8 p.m. from the sleep deprivation of the last two nights and the spell is broken. The notebook joins the legion of its kind on a dedicated shelf in my home library that brings me deep feelings of shame every time I glance in its direction until sufficient time has passed to make my latest failure seem like a fault of past-me that current-me feels ready to conquer again.

My attempts at blogging don't involve the fancy paper goods or the handwriting anxiety issues, but the results tend to be similar.

So, here's current-me once again. Stopping here before I get out of control again.

P.S. (Oh no. I found a loophole. I promise just a couple more sentences.) Here's a link to a poem I just fell in love with, from the pages of Cultural Weekly. It's by Laura Grace Weldon, who not only has a marvelous way with words, but also one of the best author photos I've seen in a while. Enjoy:

Posted by Embley Veronica at 9:36 AM No comments: