Rough Beasts: The Zanesville Zoo Massacre One Year Later by Charles Siebert
My rating: 3 of 5 stars

This is a case I find rather fascinating, as I do most cases of individuals who keep wild animals captive less as simple lapse in judgement about these animals' desire to be one's companions (though that is part of it), but more due to having one's identity wrapped up in a belief that, as their owner, they are more powerful, desirable, interesting, or intelligent than everyone else because of a perceived special ability--an almost magical thrall--they alone have because they have caged (and thereby controlled) these "dangerous" animals. Often this extends into a belief that they either have a unique strength or dominance over the animals they've obtained, or that they have developed a kind of pseudo-scientific "system", that allows them to interact with wild animals without being considered food, obstacle, or playthings by them, as one would normally. This belief is so firmly entrenched in their psyche that it frequently remains despite repeated accidents, injuries, close calls, or even deaths of friends or acolytes.

For the true crime junkie, I think this is a particularly lurid and bizarre story. While not entirely unique, few attempted mass murderers carry things out to quite as dramatic an end as this man did, having used (spoiler? Sort of? It was all over the news a few years ago, and I think the fact that this is a retrospective you are supposed to know this. It may be on the back of the book, even.) the animals (he claimed to care so much about) as attempted murder weapons.

I think the book is honestly awfully easy on this guy, offering a sometimes-sympathetic view of a man who exploited the animals he purportedly deeply loved, yet ultimately killed them all in an attempt to take his rage out on everyone around him. He ignored these animals' needs, deprived them of the ability to express even the most basic behaviors normal to their species', then used them as disposable killing machines. His firm belief in his ability to keep his friends and family safe from attack by avoiding feeding the animals any blood...followed by the act of opening every cage before smearing himself with blood and killing himself so that the animals would eat his body, shows that he had every intention of sending them on a bloodthirsty rampage to attack the neighbors (who complained about his neglect and negligence), their animals (those boring domestic animals the neighbors argued were in danger), and the animal control workers and police he held in such contempt. He knew his animals would be shot and killed, and yet he used them as pawns in his revenge plan, because ultimately it was all about his ego, no matter how many times and ways he tried to convince himself and others that he cared so much about these animals that he had to break the law and endanger everyone around him. Misunderstood, antisocial individualist? Hardly. Sociopath, indeed.

I am grateful to the author for writing this book because I think it is extremely important that we understand this basic criminal profile. If we are to attempt to mitigate the damage done to the people and animals who suffer the type of abuse this sort of crime simmers in, we need to be aware of what it looks like in infancy. This kind of toxic belief system isn't exclusive to the exotic animal trade, though I do think it thrives a bit more easily among those immersed in very lucrative trade in endangered and threatened animals-as-status-symbol. Similar crimes and variations on the theme have been unleashed (no pun intended) on individuals and communities via the breeding and training of fighting dogs and certain types of innately abusive attack dog training that encourage a magical "dominance" thinking: that belief that they--and only they--can control and interact with an animal they've made dangerous. They believe this makes them stand out, are better than all others, and ultimately gives them the very toxic power high that other killers find when they amass arsenals. These weapons, however, are thinking, breathing, sentient, abused, and broken animals who make mistakes in judgement or simply do what they would normally do had they not been taken from their homes in the wild--or what they've been taught to do every waking moment by the people who trained them to kill. It's one of the very peculiar cases where the weapon is the victim, too. Interesting stuff.

View all my reviews
Posted by Embley Veronica at 11:15 PM No comments:

The Voices Project features "Anything But Summer"

If there can be an Ebenezer Scrooge of summer, I would proudly accept that title. This isn't the first time you've heard me whine about summer. But this very well may be the first time you've heard me complain about it in poem form! Thanks to The Voices Project, more people than ever will get an earful of my feelings of dread and distaste for that season everyone else seems to adore. Hopefully this time I've made my annual rant a little more fun to listen to. Please, if you would, visit The Voices Project and give it a read. If you enjoy it and really want to make my day, leave me a comment. 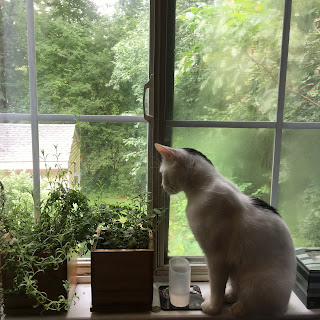 Summer: Best viewed from behind glass.

While you're there, stick around and flip through some of the other pages and poems that are there for you to peruse through. For now, I've got to go shake my fist at the last remaining days of the season, lingering about on my lawn. There are still a handful or two before autumn officially begins, and you can bet which of my handful of fingers I'll be waving them off with. So long, summer!
Posted by Embley Veronica at 11:13 PM 1 comment: